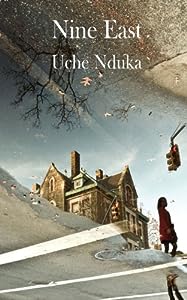 Nine East was released on the 31st of May 2013 by SPM Publications – a London-based publisher whose other authors include Roger Elkin, Mandy Pannett, Afam Akeh, Molara Wood, Nnorom Azuonye and Obemata.

ABOUT NINE EAST
Nine East uses 100 poetic observations to explore our collective human environments; teasing, questioning, celebrating, and enjoying life and how we live it, how we love, how we know and use our bodies and how far we push our minds and spirits. It is an assured, mesmerising and fun book of poetry in which every breath of love and life is captured in organic music.

"There is much to appreciate in Nduka's joyous language, his percussive rhythms; his sense of movement runs like a river..."
-Library Journal

"In Nine East, Nduka locates the grace of our graphic, bodied days, in verse somehow both free and arresting – volleyed between playful compound neologisms and stark, unaffected prose these lines capture the poet's life in all its quotidian wonder, the word recalling always our dual anatomies, formed of cell and sentence. The edges blur as we enter the pace of these pages, knowing ourselves here, asking ourselves (as Nduka asks himself, and us) why we are waiting for a bus as the poem's face is lifting off, almost slipping out of the page, making room for the unintended. They are poems for now, and for here."
- Lynne DeSilva-Johnson, Managing Editor Exit Strata

"The trouble with Uche Nduka is that he is incapable of writing a single poem that does not confirm his reputation as a – no, make that “the” – the master of the word. In Nine East, every word is a world ajar, beckoning. Reader, you must enter this world – Uche’s world made ours – where an enthralling marriage of perception and lyricism guarantees that your senses shall never be the same again. This is what we ask of the truly great poet, what we ask of great poetry of the sort that Uche Nduka delivers in this book."
- Pius Adesanmi, Winner, Penguin Prize for African Writing

Nine East is now available to order direct from SPM Publications at www.spmpublications.com and through such online retailers as Barnes & Noble, Amazon.com and Amazon.co.uk.

Until Nine East becomes available in Nigeria and other African countries, SPM Publications will deliver directly to Africa from England.

Details of Book launches and reading tours in the United States, the United Kingdom and Nigeria will be announced in due course.
Posted by Sentinel Poetry Movement at 16:55 No comments:

Details: For previously unpublished poems in English language in any style, on any subject up to 50 lines long. Poems entered must also not be under consideration or accepted for publication elsewhere and may not be entered into another competition running at the same time.

Eligibility: Poets of all ages, gender and nationality living anywhere in the world are eligible to enter.

Judge: Claire Askew author of The Mermaid and the Sailors.

Posted by Sentinel Poetry Movement at 21:16 No comments:

Last Flight to Abuja DVD in UK, Europe, and Rest of the World from Nollywood Focus

Dear lover of the African film,

We have exciting news. Last year Nollywood Focus was part of the team that marketed the bold, spectacular and glamourous world premiere of Obi Emelonye's movie LAST FLIGHT TO ABUJA - the Nollywood Director's spellbinding follow-up to the ground-breaking The Mirror Boy, which had earlier in 2011 broken virtually all records by an African film in the United Kingdom and elsewhere.

LAST FLIGHT TO ABUJA starring Omotola Jalade-Ekeinde, Jim Iyke, Anthony Monjaro and Hakeem Kae-Kazim (you will remember him as Colonel Dubaku in 24 with Kiefer Sutherland) - has not only won many awards within and outside Nigeria, but has also become the longest-running film in Nigerian cinema history grossing nearly N30 million at the box office, after a successful theatrical release in UK Cinemas and after countless screenings at film festivals in countries including Canada, Egypt, and Ireland.

Inspired by true events. A set of everyday Nigerian travellers board the last Flamingo Airways flight scheduled to fly from Lagos to Abuja on a fateful Friday night in 2006. The plane cruises at 30,000 feet, tranquil and on schedule. But like a bolt out of the blue, through a mixture of human error, technical failure and sheer bad luck, the plane rapidly develops major difficulties that sends it teetering to the brink of disaster.

As the pilots fight with the controls of the stricken aeroplane, a series of flashbacks unravel the twists, turns and leaps of fate that put each passenger on that flight.

Young lovers, an elderly couple, a corporate party, a sportsman on the threshold of greatness; all the passengers are caught up in the nightmare scenario and sense the final moments of their lives approach. All...except one!

What does he know? Will they survive...the Last Flight to Abuja?

We invite you now to buy a copy of Last Flight to Abuja and own this brilliant piece of African cinema history for good. Nollywood Focus will deliver the film directly to your door anywhere in the world for a princely sum of just £5.00 + p&p (Delivery costs just £1.50 in the UK, £2.95 in the European Union and £3.95 for the rest of the world.)

Bank Holiday Week Promotion!! Buy online between 27th May and midnight 2nd June, 2013 and we will issue you a credit of £1.00 per copy of DVD bought.

Order from the Nollywood Focus website today and pay securely by PayPal and we will dispatch your DVD within 24 hours.

If you are not into online payments and would rather pay by cheque or postal order (GB£ Sterling only), then send your payment in favour of EASTERN LIGHT EPM LTD to:

We look forward to your order.

Posted by Sentinel Poetry Movement at 21:13 No comments: