The Ted Slade Award is given annually to a person who is in the opinion of the selection panel has given unstintingly of their time and efforts over many years to promote poetry to a wider audience. Nominations for the award are made by members of Poetry Kit, and the selection is made from suitable short listed nominations, by an appointed selection panel.

Jim Bennett, who is a poet and Chair of Selectors, said, “Peter Finch has had a long and distinguished career, not only as a poet, but also as editor, critic and in recent years as Chief Executive of Academi, promoting literature. Peter has been an inspiration for many years and this award is given to acknowledge the tremendous contribution he has made to poetry.

THE TED SLADE AWARD FOR SERVICE TO POETRY

Ted Slade was the founding editor of The Poetry Kit, in every respect it was his vision and determination that saw the site grow to become one of the most visited poetry related internet sites in the world. This was done with the ethos of providing a service for readers and always putting their needs first when developing the site. For this reason Poetry Kit does not accept advertising or sponsorship and is run and funded by poets for poets. For all his work Ted received no official thanks and no payment, he did it because it was necessary and if he had not done it others with less integrity might have.
Ted died suddenly in 2004, and we always felt that we wanted to find a way to honour his memory and so we introduced an award in his name which is given to a person who has given their time and energies over an extended period to ensuring the continuance and development of poetry,. This will include people who have kept poetry as a presence in an area or community. Those who have pursued a poetic vision through a magazine or regular reading events. Those who have developed other media to explore its poetic use or have published poets who could not have otherwise found an outlet for their work.

In 2005 we gave the first TED SLADE AWARD and since then the following people have received it;


All recipients of the Ted Slade Award are acknowledged for their endeavour and dedication in the promotion of poetry. Without such people many of today's well known poets would not have had the opportunity to find a platform, develop their skills or find an audience. Recipients have their name entered onto the award and this will soon be on permanent display in a library in Liverpool.

Peter Finch is a poet, critic, author and literary entrepreneur living in Cardiff, Wales. He is Chief Executive of Academi, the Welsh National Literature Promotion Agency and Society of Writers. As a writer he works in both traditional and experimental forms. He is best known for his declamatory poetry readings, his creative work based on his native city of Cardiff, his series of books on Wales, and his knowledge of the UK poetry publishing scene.
He is an Honorary Fellow of the Royal Society of Architects of Wales (RSAW), a Fellow of the English Association (FEA) and a Fellow of Yr Academi Gymreig / The Welsh Academy.
In the sixties and seventies he edited the ground-breaking literary magazine, second aeon, exhibited visual poetry internationally and toured with sound poet Bob Cobbing. In the eighties and nineties he concerned himself with performance poetry, was a founder member of Cardiff's Cabaret 246 and of the trio Horse's Mouth. This was work with props, owing as much to theatre as it did to literature. In the new Millennium he was worked on psychogeographies and alternative guides to his native city of Cardiff. The city has become his obsession.
Today he is much in demand as a reader as well as a lecturer at festivals and venues up and down the country. You can get into Finch's performances. There's little deliberate obscurity. His talks on Cardiff and how it is with urban living are always entertaining. In addition to the readings Finch also delivers a number of presentations on the poetry publishing scene (how to get yourself published - a demystification of the arcane world of books, magazines and the internet), on the history of sound poetry (which features histrionic performances of dada texts and the playing of numerous historical recordings), on the writing of short fiction and on the history of the small press. He works with schools and has led young people's writing squads in co-operation with local authorities.
From the early seventies until the late nineties he was treasurer of ALP, the Association of Little Presses. Between 1975 and 1998 he ran the Arts Council of Wales's specialist Oriel Bookshop in Cardiff. In 1998 he took up his current post as Chief Executive of Yr Academi Gymreig/ The Welsh Academy - the Welsh National Literature Promotion Agency and Society for Writers.
Peter Finch has published more than 25 books of poetry. His latest is Zen Cymru, published by Seren Books (April, 2010). His other titles include Food, Useful & Poems For Ghosts (Seren) and Antibodies (Stride). His The Welsh Poems appeared from Shearsman in 2006. His Selected Later Poems was published by Seren in November 2007.
His prose works include a number of critical guides including How To Publish Your Poetry and How To Publish Yourself (Allison & Busby) as well his famous alternative handbooks, guides and literary rambles, Real Cardiff , Real Cardiff Two and Real Cardiff Three (Seren). With Grahame Davies he edited the anthology The Big Book of Cardiff (Seren). He is currently editing titles for Seren's Real Wales series and has published a book that takes in the whole country - Real Wales.
Nerys Williams's essay on Finch's work appears as Recycling the Avant-Garde in a Welsh Wordscape in Slanderous Tongues - Essays On Welsh Poetry in English 1970-2005, edited by Daniel G Williams and published by Serten, 2010.
Until recently Peter Finch compiled the poetry section of Macmillan's annual Writer's Handbook. He continues to write the self-publishing section for A&C Black's Writers' & Artists' Yearbook. He is a book reviewer and writes articles on Cardiff, Wales and the business of poetry. His poetry and criticism is widely published in magazines and anthologies.

His column, The Insider, appears weekly in The Western Mail. His blog is at http://peterfinchpoet.blogspot.com/


THE POETRY KIT - http://www.poetrykit.org/ The Poetry Kit is one of the worlds most visited sites dedicated to poetry. Provides links to resources for poets across the world. 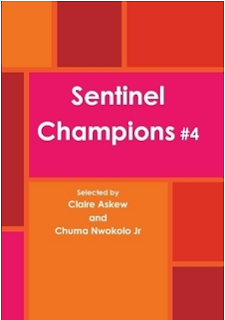 sentinelpoetry.org.uk/champions
Posted by Sentinel Poetry Movement at 18:28 No comments: